A rare London date for the sax quartet!

The London launch party for the Quadraceratops album!

A varied month of music – a few gigs in the west country with the Philip Clouts quartet, an unexpected last-minute call to play bass clarinet in a rehearsal for the e17 large ensemble which turned out to be a video shoot(!), playing cuban songs with a voice/alto sax/congas trio, playing with Chris Dowding at John Hegley’s night at the Betsey Trotwood and going to see lots of gigs – the highlight of which was clearly Loose Tubes at Ronnie Scott’s, but Louis Moholo-Moholo at Cafe Oto wasn’t far behind!

Two lovely Ti/om gigs this week, we’re both looking forward to doing a studio recording of the duo in a couple of days time. In the meantime, here are a couple of photos and a soundcloud of the Lume gig: 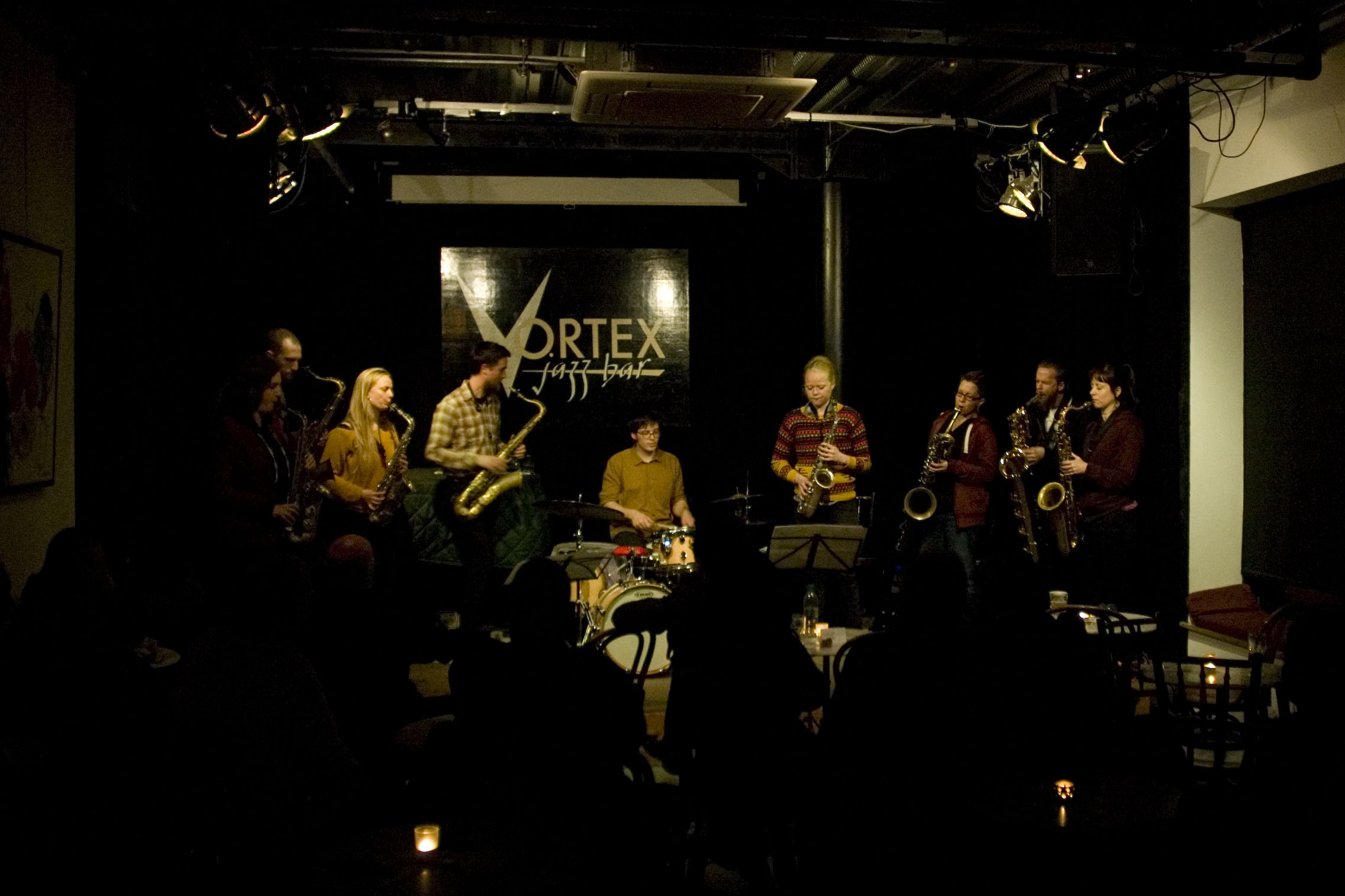 A new collaboration has its first outing at Trio Riot‘s Vortex gig. After Trio Riot’s set, they will be augmented by a further six saxophone players (including myself) for a total of eight saxophones. Chaos ensues.

Ti/om will be playing at Dalston’s Servant Jazz Quarters as one of three Brockley-centric improvising duos. With the other duos Ripsaw Catfish (feat. Anton Hunter & Cath Roberts) & the duo of Colin Webster with Graham Dunning it promises to be a great night!

I’ll be taking the place of Carlos Lopez-Real for a few dates of the Philip Clouts Quartet. More details to follow…

We had a great time playing the developing Mechanical Mindset set to a lovely crowd at the Vortex!

On the playing side, Cath Roberts‘ Quadraceratops had a brilliant gig at Lume back at its old home Hundred Crows Rising opposite Dee Byrne‘s Entropi. There was a really good audience and the band continues to go from strength to strength. Despite being a South London resident these days, I also depped on bass clarinet & bari sax with the e17 large ensemble, which was a good chance to dust off the bass clarinet and get stuck in…

On the listening side, Wadada Leo Smith at Cafe Oto was immense. Incredibly powerful, expansive, engaging music, although the night that we were there the string quartet didn’t play a very large role. The visuals at that gig were also brilliant, it really felt like another member of the ensemble adding an extra dimension to the experience. Troykestra seemed like a great idea in principle, but was hampered by pretty poor sound in the Purcell Room.

Here’s what I’m up to in the near future:

A short after-work gig at the Vortex, curated by Chris Dowding.

The n-tet has been rehearsing for a while, this is the gig!

Including a one-off collaboration between the two bands…

The recording of the Sax Quartet gig from Ryan’s bar sounded so nice (aside from a slightly shaky first 30secs…), that I’ve put the entire gig online. Lovely playing by everyone! Listen here: